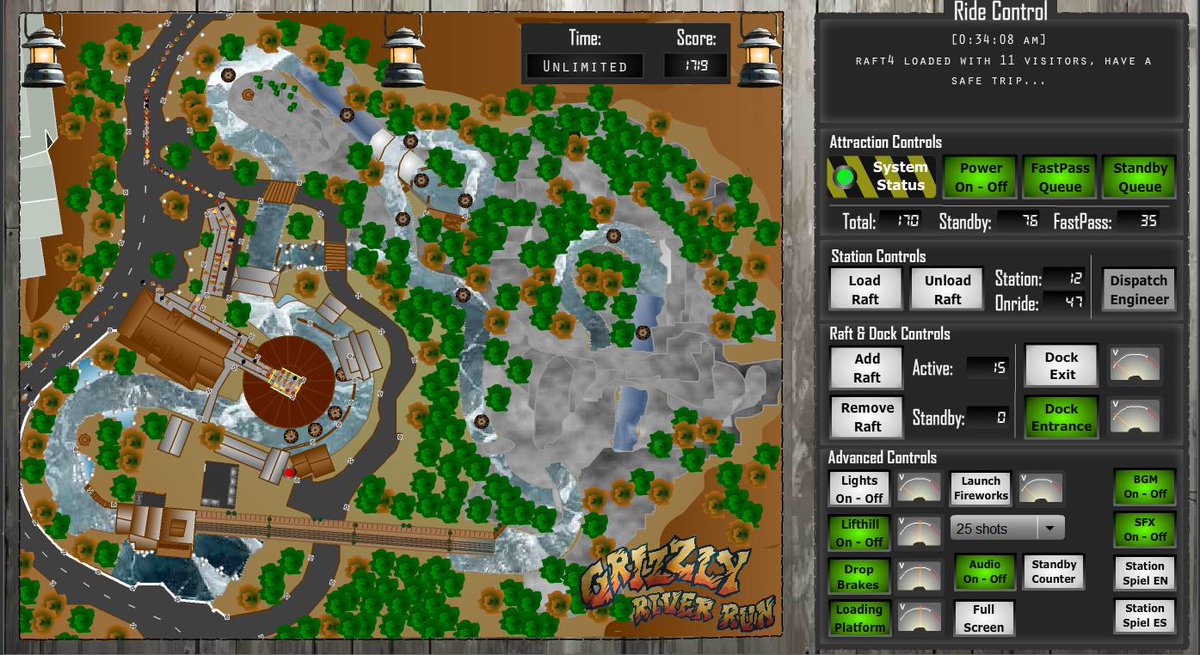 Main Ride: The raft trip around Grizzly Peak begins with the raft being lifted up a wooden conveyor that runs under leaking pipes that spray water on the riders. Upon reaching the top of the conveyor, the rafts are dropped into the water to be descended down the peak, passing through a cave and bumping against a log jam. The climax of the ride drops the rafts down into a geyser field. The final drop has a unique element in that the rafts are spun as they begin their descent.

As with all flume-type rides, there must be a location to store or drain the water in the upper sections of the flumes when the pumps are shut down. The original plan was to create a large, underground basin beneath Grizzly Peak to hold water. This would have required costly excavation and construction. Upon looking at the final layout of California Adventure, it was noticed that the Pacific Wharf area of the park had a water element meant to simulate a tidal basin. The tidal basin is located across a walkway from Grizzly River Run and became the catch basin for water from the raft ride. The rise and fall of water in the tidal basin serves the dual purpose of providing a location to store water and being a scenic element that simulates a rising and falling tide.

Queue-line (Pre-Show Storytelling: As part of the park's major 2007–2012 refurbishment, the old queue that had been themed around extreme sports was replaced with an homage to California state parks, specifically after Redwood Creek and the Sacramento River. Elements that evoke the "golden age" of national parks are placed around the entrance, alluding to the wave of turn-of-the-century wildlife conservation.

Boats: 32 boats total. Riders are arranged 8 across in a single row for a total of 8 riders per boat.

Accessible: Guests in wheelchairs must transfer from their wheelchairs to experience this attraction.
Last edit: 18 Oct 2015 23:34 by Reighard.